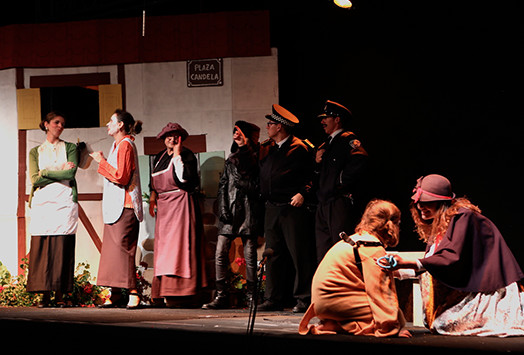 The old lady tells us how the city of Güllen is in crisis. Their companies are ruined. There is no money for anything… But its inhabitants have hope. Clara Zachanassian visits, after a long time, the city that saw her born. Everyone knows that she is rich and they expect her to help them get out of the crisis. She will help them, but this help will have consequences.

Directed by Mercedes Saiz Martínez
She holds a diploma in Dramatic Arts by Dramatic Arts School in León (Spain). She has worked as an actress with different professional companies and under the direction of Margarita Rodríguez and Fernando Urdiales. With the company Teatro Corsario, she won the prize “MAX” for the best Revelation Show with the play La barraca de Colón. She has beenawarded many prozes as director of the companies Kikodín Teatro and Trejoviana Teatro. Currently, she directs and works as a teacher at Aula T de Teatro.