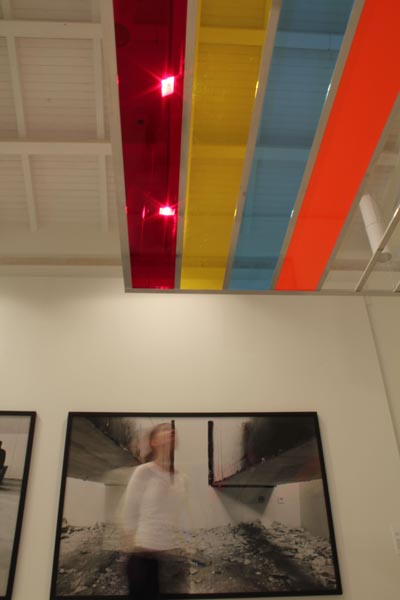 International Artists present in the exhibition
An Italian photographer, two German painters and two British artists are the international artists in “Constructing Minimalism”.
Luisa Lambri (Italy, 1969) participated in one of the residence programs offered by Fundación RAC in 2008. The work displayed by Fundación Cerezales is the result of this and consists of photographs of the Centro Galego de Arte Contemporánea in Santiago de Compostela, a building designed by Portuguese architect Álvaro Siza.
Her images are subjected to an abstraction process that captures sections of buildings and makes them almost unrecognizable. In her work light becomes the predominant figure.
Lambri proposes new ways of looking at things, showing what is happening in space, not the actual space.
Imi Knoebel (Germany, 1940) is a critically acclaimed artist in the Spanish contemporary art scene thanks to his minimalist and abstract paintings and sculptures.
His work is very much influenced by the aesthetic principles of Bauhaus and is in a constant search of a sensation of pureness achieved through an interactive colour-associated experience.
Gunther Forg (Germany 1952) is a prominent artist who works in different artistic disciplines such as sculpture, photography, painting and graphic design. This creates interferences in his work. His style is influenced by American abstract paintings. His geometrical abstract and heavily dyed pictures have a strong decorative character and he uses lead in his works to confer them a special strength.
Jonathan Monk (United Kingdom, 1969) is one of the most interesting young artists in the contemporary British scene. His work is based on autobiographical references and others excerpted from the history of art as in Lost Idea, based on the work by American artist Ed Ruscha.
Liam Gillick (United Kingdom, 1964) is one of the most important artists in the 1990s. Through his work he wants to transmit to the spectator the relationship between sculpture, furniture and architectural elements. With his interventions, he also invites the public to go through space and experiment it in different ways.
National Artists
Diego Santomé (Galicia, 1966) is a multidisciplinary artist who bases his work in incorporating his own vital experience into the artistic language. He is constant search of a link between his work and society or the shifting of the aesthetic enjoyment into the social interaction context. In this instance, by means of an industrial material, neon, he suggests the need of returning to ourselves.
Txomin Badiola (Basque Country, 1957) became one of the best representatives of the so-called new Basque sculpture during the 1980s. In his installations the spectator becomes the centre. He says: “I don’t want to communicate something; I want to communicate with someone”.
Santiago Sierra (Madrid, 1966) is one of the most influential Spanish artists, working and living in Mexico since 1995. His work hopes to underline the problems posed by capitalism to the population while it questions established power relationships.

Entry to the exhibition is free of charge.
Opening times:

Guided tours for groups:
Groups must book in advance. 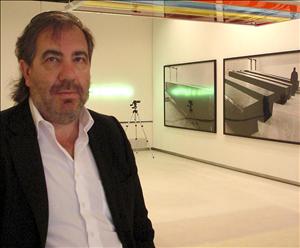