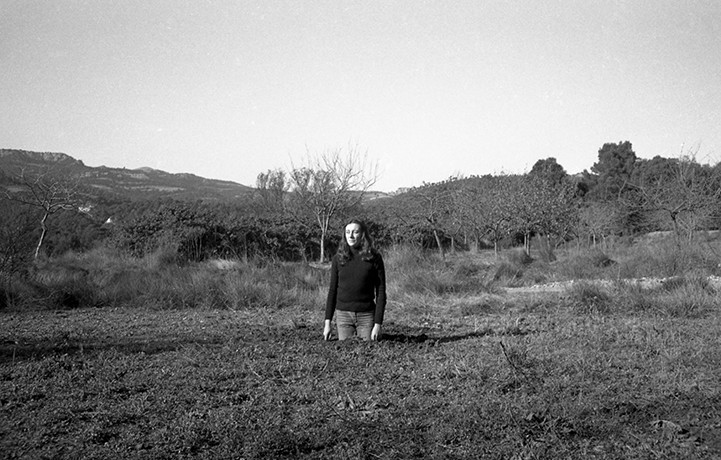 This project brings into dialogue the artistic practice of Fina Miralles (Sabadell, 1950) with that of Rita Ponce de León (Lima, 1982). The work of both, although generationally and geographically distant, is extraordinarily close in substance, entering indefinite spaces where life prevails over any fixed structure.

Fina Miralles’s simple but poetic actions in nature and her drawings, poems and paintings insist on the internal unity of the natural universe in confrontation with the artificial universe that arises from the modification of context by human intervention. The works of Rita Ponce de León generate deep learning processes that occur though affect and physical proximity, letting time do its work, reherarsing different postures and ways of relating to the senses and the collective. If for Miralles writing and drawing are elements that dance together in her universe and help her share the most intimate feelings, for Ponce de León drawing is a particular way of thinking and being thought. A way of drawing that arises from doing or remembering body movements and experience. Bodies that accumulate history, time, emotions, intuitions, relationships, doubts, convictions. Bodies experiencing the change and cycles of nature, becoming humans as plants and as animals.

In this hyper-connected world, liquid and swift, a return to a certain essence is necessary. The works in this exhibition articulate a sincere dialogue among themselves and with the environment, creating sensitive connections and forming a poetic language based on a close dialogue with the earth and an intense presence of being.

Fina Miralles (Sabadell, 1950). After studying Fine Arts and the death of her parents, she starts a vital pilgrimage that takes her to South America, the North of France, Italy and other places, until she reaches Cadaqués, where she continues to live faithful to her daily dialogue with the land, the sea ​​and the rhythms of nature. Among her individual exhibitions are Fina Miralles, Paraules fèrtils, 1972-2017, Museu d’Art Sabadell, Sabadell (2017); Unió dels Oceáns, PM8, Vigo (2013); Of idees to the life, Museum of Art of Sabadell (2001); A l’espai, Joan Prats Gallery, Barcelona. (1983); In l’aire, Metronom, Barcelona (1982); Paisatge, Joan Miro Foundation, Barcelona (1979); Naturaleses naturals, Sala Vinçon, Barcelona (1973). Among the collective exhibitions stand out The inverted mirror: Art of the collections of  “la Caixa” Foundation and the MACBA, Guggenheim Bilbao, Bilbao (2012); re.act.feminism # 2. A Perfor-ming Archive, Fundació Tàpies, Barcelona – Montehermoso, Vitoria (2008); A battle two xéneros – CGAC – Galician Center for Contemporary Art, Santiago de Compostela (2006); Art Happens – Origin of conceptual practices in Spain (1965-1980), Reina Sofía National Art Museum MNCARS, Madrid (2005) or its participation in the XXXVIII Biennale di Venecia, Spanish Pavilion, Venice.

Rita Ponce de Leon (Lima, 1982. Lives and works in Mexico D.F). He studied Plastic Arts at the National School of Painting, Sculpture and Engraving “La Esmeralda” in Mexico D.F. and at the Pontifical Catholic University of Peru in Lima. In 2016 he participated in the 32nd Biennial of Sao Paulo, Brazil and in the In Situ program of the Lima Art Museum (MALI). His most recent solo exhibitions include: Stelo, (Bipersonal along with Rodrigo Hernandez), Galleria P420, Bologna, Italy; With your own hands, Joan Miró Foundation, Barcelona, ​​Spain, (2014); Endless openess produces circles, Kunsthalle Basel, Switzerland, (2014); David, Siqueiros Public Art Hall, Mexico D.F., (2012); Floor because I believe in the ground, Museum of Modern Art, Mexico D.F., (2012); I have decided to fork, Centro Cultural Border, México D.F., (2011). Ponce de León has also participated in group exhibitions and Biennials such as: Cuenca Biennial, Ecuador, (2014); Trienal Kleinplastik Fellbach, (2014); The Ungovernables Treinnale New Museum, New York, (2013); Carrillo Gil Art Museum, Mexico D.F., (2013). He has also received financing for the production of projects of the National Fund for Culture and the Arts (FONCA), Mexico D.F.