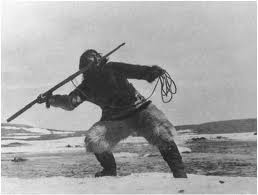 Considered to be the first documentary in history, it shows the difficult relationship between man and the natural environment, leading the way of cinematography towards ethnographic cinema.
Pioneering documentary which narrates the harsh life conditions of an Eskimo family in the Arctic. The reality of the family and the harsh conditions are depicted by anthropologist and explorer Robert J.Flaherty, as a result of a stay where he filmed the everyday life of Eskimo Nanook and his family at the beginning of the 1920s.