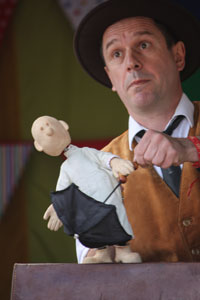 Plain bob is an innocent and gentle show with no words, performed with mime, music, and sound effects. As the audience watch, bob’s world is created under an umbrella from suitcases and a raincoat. Audience members are then invited onto the stage to help bob with his simple tasks.
In 2013 Plain Bob was the winner of The Best Street Show award and nominated for Best Children’s Show at The World Puppet Carnival in Indonesia.
Plain Bob has also been performed in Czech Republic, Denmark, Austria, and Romania.