Walking on and off the Path – Hamish Fulton 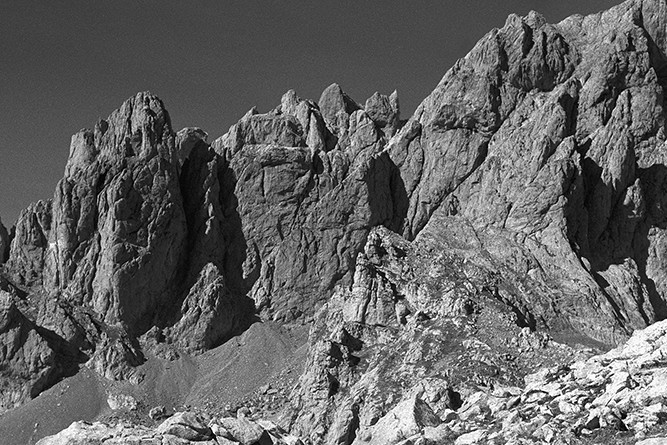 Walking on and off the Path – Hamish Fulton

Hamish Fulton will open the new equipment of the Cerezales Antonino and Cinia Foundation, with a sample of unpublished works, produced after a walk in the western part of Picos de Europa, in October 2016.

Hamish Fulton is a walking artist. He was born in Great Britain in 1946 and he has become one of the most important references of contemporary art. Departing from the so-called Land Art, Fulton has researched, over the last 50 years and in hundreds of individual and group walks, on walking as an artistic practice. He observes the landscape, he does not modify it, he leaves no trace.

Walking is an act against alienation. As he points out: Walking, without resorting to any other means of transportation than our own feet, without substitutes, allows us to experience life: “relaxation, exercise, meditation, health, oxygenation of the brain, transportation, sport, non-violent protest marches, art and much more”.

Since 2009, Cerezales Antonino y Cinia Foundation considers walking as a movement of thinking. It shares the idea of being invisible, to a greater or lesser extent, in a complex world, while claiming every statement of intent as a commitment to action, beyond theory. FCAYC has complied with the rules that define the place in which its action is inserted and for this it is needed to walk it, to perceive the distances under its feet, between its neighborhoods, to adopt its vocabulary, to understand the proximity between its wild side and the one intervened by humanity. All this has shaped his philosophy.

Therefore, FCAYC claims to walk as a policy and comes to Hamish Fulton, a reference in the implementation of this methodology. The meaning of this collaboration is to confront the relationship with the context as an ongoing process rather than as a collection of objects of greater or lesser artistic reflection.

To carry out this project, Fulton has done a solo circular walk during 14 days, in the western area of Picos de Europa, the context in which the Foundation is circumscribed. In October 2016 and starting from Soto de Sajambre, Fulton gave continuity to seven walks interconnected by the Iberian Peninsula, which he had carried out in the past decades.

Walking on and off the Path is the title of an exhibition produced by FCAYC and fruit of those days walking along the mountain of León.

Two group walks with the artist and a publication on walking, with texts by researchers from different disciplines, will also be part of this proposal of Cerezales Antonino and Cinia Foundation.