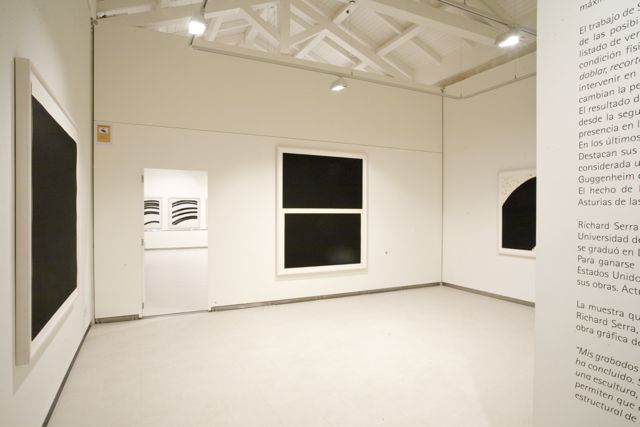 Tags:
Exhibition
10 July, 2010 - 3 October, 2010
This exhibition is a highly enlightening introduction to a significant part of the graphic work of one of the most important contemporary sculptors of the second half of the 20th Century.
Ciclo:
Encerezados, Encerezados 2010, Exposición: Peso y Materia. Richard Serra obra gráfica., Prácticas en el espacio expositivo

Different forms of expression have evolved from the minimalism of the 1960’s. It was art critic Robert Pincus-Witten who coined the term “Post-minimalism” and it is within this context that the art of Richard Serra lies, as does that of other artists such as Eva Hesse, Robert Moirrus or Bruce Newman-Process.

Serra’s work is based on direct, physical and intellectual experimentation with the materials he uses. Between 1967 and 1968 he put together a list of verbs to describe the actions which guide him when he is changing the physical condition of materials, during his personal creative process: “to roll up, to fold, to bend, to cut, to break, to rip…”. In 1972 Serra began to participate in urban spaces and in the landscape by means of impressive sculptures which change one’s perception of the environment.
The result of this process is the most important body of sculptural work of the second half of the 20th Century. His work now features in the world’s most important contemporary art collections.
The artist has recently developed a particular interest in Spain and we should mention his work which was exhibited in the Centro de Arte Reina Sofía or one of his most important works: “The Matter of Time” which was on show in Bilbao’s Guggenheim Museum.
This relationship with Spain has been consolidated by his having been distinguished with the Prince of Asturias Award in 2010.
Richard Serra (San Francisco, 1939) finished his postgraduate course in Fine Arts at Yale University after having studied English Literature at Berkeley and Santa Monica.
To earn a living he worked at a steelworks on the west coast of the United States where he came across what would turn out to be the principal material in his work. Nowadays he lives and works in New York.
This exhibition, organised by the Fundación Cerezales Antonino y Cinia under the title: “Weight and Matter – Richard Serra, Graphic Work”, is a carefully selected cross-section of the artist’s most recent graphic work.
“My etchings are mainly studies made after I have finished a sculpture. They are the result of the attempt to define and evaluate what has surprised me about a sculpture, what I could not understand before having finished the task. They allow me to understand different aspects of perception and the sculpture’s structural potential.”
The exhibition includes 15 large, monochromatic etchings which demonstrate a powerful sensory attitude. They share with his sculptures their elliptic and sinuous shapes and their curved volumes created by large blots of black ink. A good example is “Between the Torus and the Sphere” where a series of black curves invade a dotted canvas. In “Paths and Edges” he transmits a sensation of 3D which endows this particular etching with the same concept of weight and size found in his sculptures. The “Weight” series follow this line of investigation. He tries to imitate sheets of black steel in order to give the pieces the sensation of density. The “Level” series, named for the amount of solid black oil paint used in juxtaposition to the blank spaces of the original paper medium, is a perfect excuse to reflect on the contrast of weight and mass on the one hand, and the inherent lightness of the medium on the other.
Due to the enormous scale of the etchings, Serra designs in advance the special tanks he uses to submerge the huge sheets of steel in a water and nitric acid solution which corrodes the copper until it is ready to be used. To achieve this material effect, Serra needs between four and five days and up to 500 grams of ink per imprint. He rounds off his etchings by applying a thin layer of acrylic varnish which allows the work to be framed without glass, thereby avoiding the need for any extraneous element which might otherwise interfere in its viewing.
The systematic use of black in his graphic work, as well as provoking a contrast with the white backgrounds, springs from his desire to avoid any illusionist connotations or metaphorical risk associated with colour.

“Black is a property, not a quality. in terms of weight, black is more dense, it creates more volume, it contains itself in a more dense field. It can be compared to ironwork, (…). Using black is the clearest way to make something stand out against a white background. (…) It is also the most decisive way to leave without creating any associated significances. (…)The use of any other colour would be the extension of chromatics with its inevitable allusions to nature… I am interested in the mechanisation of the graphic process, not in illusionist pictorial gestures”.
By the presence of black on the canvas, Serra seeks to structure spaces which diverge from the architecture found in the exhibition hall, thereby demonstrating his concern for the search for three-dimensionality.
The Fundación Cerezales Antonino y Cinia wishes to thank La Caja Negra Art Gallery for their inestimable collaboration in the production of this exhibition and for the tremendous interest and support that they have shown to this cultural project from the outset.