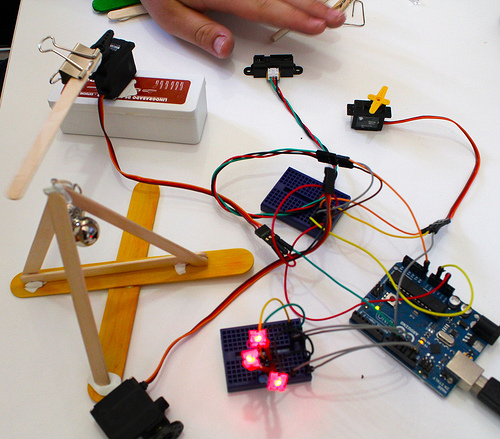 Taught by David Dalmazzo, this is an introductory course aimed at young people between 12 and 16 years old that are interested in basic electronics to learn to control small motors and LED.

The principal idea is to take advantage of the open source information available on the Internet in projects like Arduino, in order to create motorized beings, which could emulate small insects with a simple function like observing or moving according to parameters and data sent by sensors.

Those, can be movement sensors, touch sensors or light sensors and trough them we are able to control the motors’ movement allowing the participants to create their own insects with movement, color and sound.

Arduino is perfect for this introduction course because apart from being a micro-controller is an open project that has generated a big community around itself that s hares information with the whole world via Internet.

Even Google and Android have incorporated this platform in their R&D departments. Therefore, Arduino is in constant evolution and works as an starting point to a way of understand electronics, but also is an interesting educational option that inspires active and autodidactic learning.