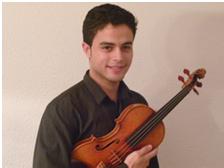 Born in León, he began his music studies with Margarita Morais and took violin lessons with Pierrette Saint-Geremie. Later he moved to Oviedo to receive lessons from Jose Ramón Hevia.
He finished the Grado Superior in the Conservatori Superior de Música del Liceu, Barcelona with violin teacher Gonçal Comellas. He received a grant from the institution to complete his studies and achieved the highest mark..
He attended several master classes taught by Sergei Girshenko, Alexander Melkinov, Gonçal Comellas, Liviu Prunaru, Mark Gothoni, Michel Wagemans, Boris Belkin, and so on.
From 1998 until 2002 he was a member of the Youth Orchestra of León. In 2003, he was invited to take part of the European orchestra IRO and gave several concerts in Germany. He has been part of the Orchestra of the Conservatori Superior de Música del Liceu in Barcelona in the position of first violin. He has been invited to perform as soloist with the OGB, conducted by Sergio Vicente. He has worked as first violin in the orchestra of Monty Python’s Spamalot musical in Teatro Victoria, Barcelona during the 2008-2009 seasons.
He has performed in music halls such as the Ateneo in Barcelona, Palau de la Música, Gran Teatro del Liceo, Auditorio Caja Madrid in Barcelona, Auditorio Caixa-Forum, Sala Euterpe in León, Auditorio de Zaragoza, Círculo de Bellas Artes in Sabadell, etc.
Currently, he is a teacher in the Municipal Conservatory of Barcelona.