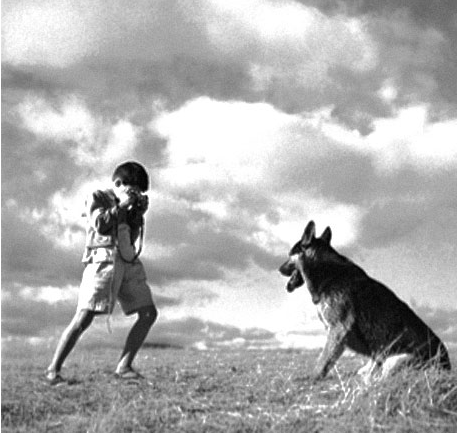 Bernardo Alonso Villarejo (Bembibre 1906-1998), amateur photographer, worked behind the objective of the mythic Leika and Rolleiflez cameras, and he archived to express his personal reality and his world through a very original photographic language for his time.
His social condition allowed him to experiment and inmerse himself into the photograpy world. Although his production is not very large, he worked mainly in the 50’s, he left a notable sample of his work’s excellence.
Master of chiaroscuro, great light analyst, with well worked and descriptive compositions but also with more sutile scenes which look for the recording of one moment; interested in the recreation of sceneries and gesture’s expressiveness, and also in the introduction of effects to highlight the scene, he deepened in diverse subjects, from the most in intimate rural world to the big European cities such as Paris, Rome, Venecia or Lisbon; childhood and maternity; everyday life and the spiritualism; water as a expressive element, the sea and the experimental series.