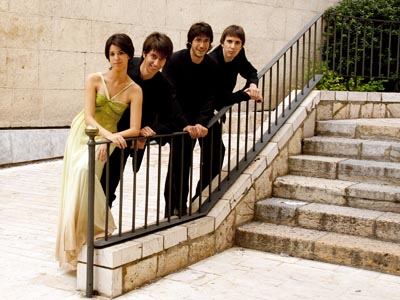 Gerhard Quartet was founded in 2010 with the intention of creating a solid project in order to succeed in the professional arena. The four components of the ensemble boast long careers as soloists, and as members of the main youth orchestras in Spain and Europe and chamber musicians.

They get advice from Casals Quartet and Szymanowski Quartet. They have won the Classical Music Interpretation 2010 award by INJUVE and also the 1st prize in the 12th International Chamber Music Competition Ciutat de Vinaròs that took them on a tour around the country organised by the Spanish Musical Youth.

They have performed in Malaga, Festival of Segovia, and Círculo de Bellas Artes de Madrid among others. Also, they have participated in the International Chamber Music Campus (Weikersheim, Germany) along with the Casals Quartet and have received a grant by Jeunesses Musicales in Germany in order to return the next term.

Recently, they have been selected to participate in a Masterclass programme by ProQuartet in Pont-Royal with Heime Müller. Their interpretation in the closing concert was broadcasted by SWR, a public German radio.

Next summer they are due to perform in Germany (MozartFest) and Finland.