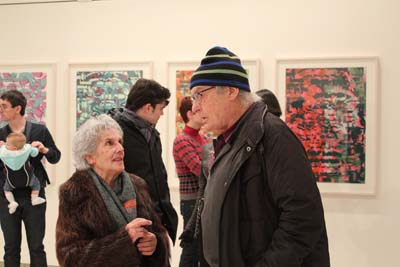 Considered as one of the most important referents of the recent Spanish pictorial creation, the work of Luis Gordilllo (Seville, 1934) is among the most important collection of Spanish contemporary art. Thanks to a long artistic career , he is worthy of the most prestigious prizes of plastics arts awarded by Spain, such as the National Arts Award (Premio Nacional de Artes Plásticas) (1981), the Velazquez Arts Award (Premio Velázquez de Artes Plásticas) (2007) and the Honoris Causa of the University of Castilla La Mancha (2008).
He owns a personal and hard to classify style which comes from a marked by experimentation and change of register career. This might be the consequence of his trajectory along different artistic movements such as Informalism, Figurativism, Pop Art or Postmodern abstraction. Besides, we need to add to his own esthetics, his persistent interest for the psychoanalysis. This method has marked his work and through it he wants to express his inner tensions.
Luis Gordillo develops a work which is obsessed with images, studying them, varying them and emphasizing their possibilities.