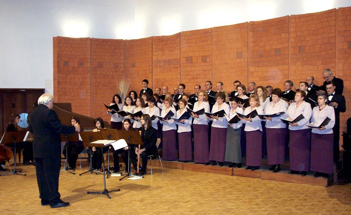 The Heriberto Ampudia Choir was founded towards the end of 1987 in the Parish Church of the Annunciation and from the outset it attracted to its ranks people who were excited about singing. Today, it has some 50 mixed voices and members of all different age groups.
The Choir’s consolidation and improvement have been possible thanks to the hard work and experience acquired in numerous concerts given throughout our own region and further afield. The Choir has collaborated with the Junta de Castilla y León, the Provincial Council, Caja España, Caja Madrid, various C.E.A.S. (social action centres) and other institutions both private and public. Nowadays, they enjoy the backing and sponsorship of the San Andrés del Rabanedo Town Council.
They have taken part in the VII, VIII and IX Castilla y León Choir Festivals (el Festival Coral de Castilla y León); in the “Villa de Fuensalida” Polyphonic Music Encounter in Toledo; as guest choir in the High Mass of the Monastery of Santo Domingo de Silos; in the I Festival of Children’s Choirs in the Cathedral of León (I Muestra de Coros Infantiles de la Catedral de León); in the I and IV choir contests organised by San Andrés del Rabanedo’s town council and in many other festivals and contests.
They have accompanied Amancio Prada in a performance of his “Spiritual Canticle”, based on texts by San Juan de la Cruz, and also the group Sirma, which performs Sephardic music.
To mark the IV Centenary of the first edition of El Quijote, they gave a concert based on Cervantes’ famous text, using music which in some cases was even older then the text itself.
During Holy Week 2006, the Choir inaugurated a series known as “Chants of Passion” and offered concerts with the responses, motets and the Passion of St. John taken from the “Officium Hebdomadae Sanctae” by Tomás Luis de Victoria. In 2007 they were invited back to participate in the second edition of the series.
In addition, the Choir participated in the XIX Ángel Barja Memorial Concert (2007), singing popular songs from the Kingdom of León, harmonised by Barja, as well as a number of madrigals and songs with texts by our poets from the XV and XVI centuries.
In 2007, they took part in the Certamen de la Canción Marinera in San Vicente de la Barquera.
The Choir is conducted today by Luis González Viñuela.