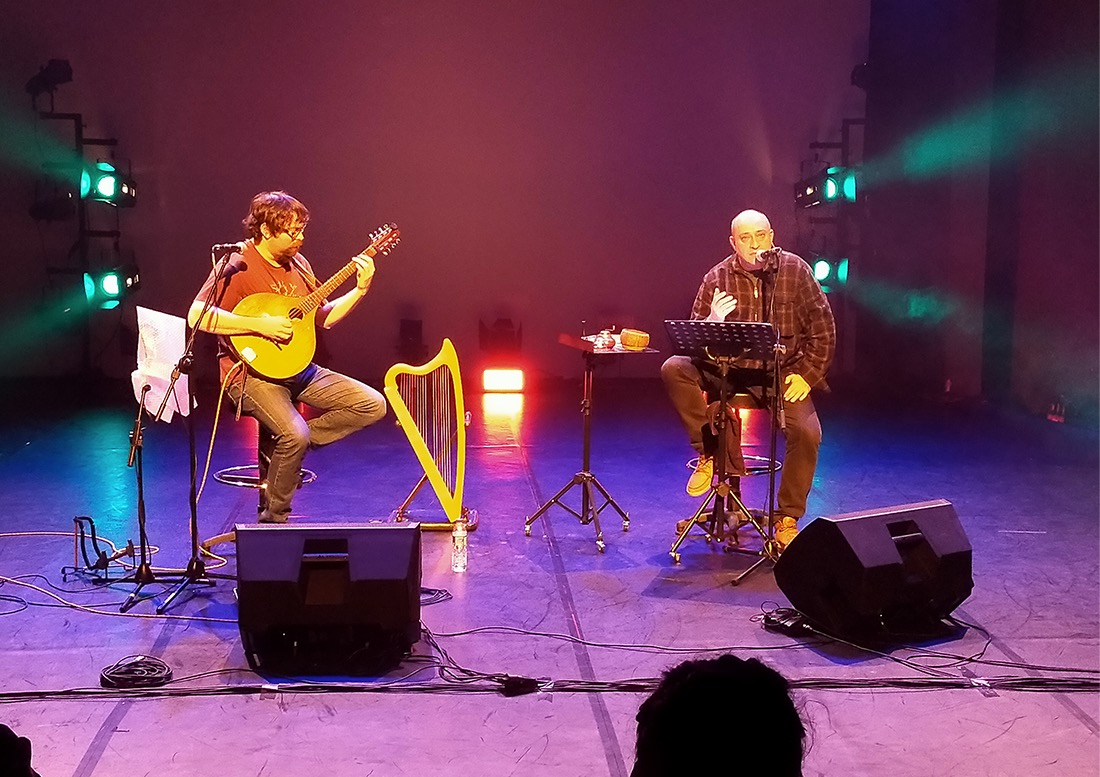 caja baja is the encounter of a musician with traces of an anthropologist and a poet who wanted to be a musical actor and performer. caja baja is a murmur in the grove left by someone in the middle of the city traffic. The duo makes up a strange couple who pass around a stick that tastes like a “sebe” and sounds like the sawdust on the floor of the bar of our grandparents. When you hold it, it forces you to tell stories: which could be Antonio Gamoneda’s Castilian blues, a tale from Sanabria, a distorted traditional piece, an upside-down romance, a voodoo poem… In caja baja, every female wolve is brown.

The type of research they carry out has to do with ethnography, cultural anthropology, free improvisation and poetics, and it evokes, without contradictions, the rural bars and “chigres” of our grim land in León and the libraries, the magic of oral transmission and imagination in a new way of story-telling.

All the possibilities are likely to seem attractive when composing. It is true that they use technology to process sound and that they sometimes like to cook the sound material, but they also do not give up an interpretation in the traditional sense of the word. Ultimately, no limits are imposed in any sense. Later, this sound material comes into contact with the word, they interact feeding each other, influencing each other, becoming at times the same aesthetic material, a strange soundscape that evokes, in equal parts, the ancestral and science fiction.

Victor M. Díez. Poet, actor, cultural agitator. He is the author of a dozen published titles. He has been involved in numerous theatrical and audiovisual productions. He belonged to the pioneering music-poetic improvisation group SIN RED and is a regular on the contemporary Leonese scene. He has been responsible for the organization of multiple scenic, literary and musical programs in his role as a programmer.

Rodrigo Martínez is an indispensable part of the Leonese music scene, dedicating himself to folk in a singular way, in groups such as TARNA or, previously, Pandetrave, Reñoberu… He has participated in music-theatre productions such as the four seasons of Cuatro de 4. among others. Under the label “Música con tsume”, he has been the collective responsible for many recordings and compilations related to Leonese folk.

In his ethnographic interest in first-hand knowing the musical heritage of our homeland, in a broad sense, he treasures a large archive of music and stories collected by himself.