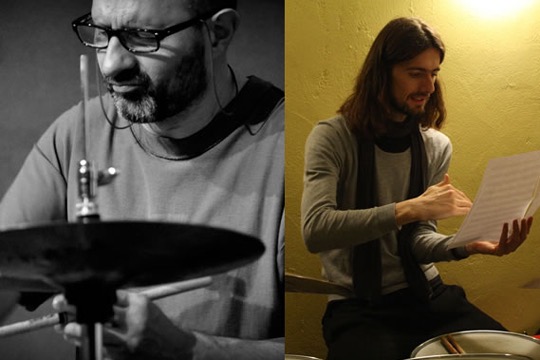 Hasier Oleaga is one of the most active young Basque musicians of recent years. In spite of his youth, it is not easy to make an exhaustive list of the groups with which he has played or with which he has recorded albums. Concerning jazz music, his name is associated with Nevermind Trio, The Heckeler, RS Factor, Kase-O Two Quartets Experience, Santa Pau 44 Quartet, Miguel Salvador Project, Iñaki Salvador Trio, etc…

Jorge Rossy is the most international of Spanish jazz musicians. Between 1982 and 1989 he played and recorded with Perico Sambeat, Tete Montoliu, Carles Benavent and Chano Domínguez. He then moved to Boston to study trumpet, but soon many musicians started choosing him as a drummer. He has played with Joshua Redman, Bill McHenry, Bruce Barth, among others. In 1995 he joins the trio of Brad Mehldau, with whom he was for a decade. In 2000 he returned to Barcelona. In the last ten years he has been playing and recording the piano with bands like Jordi Matas Quintet or Joe Smith Septet. In 2006 he recorded his first album as a leader: Wicca. But in this time he has continued playing the drums occasionally and with various projects with the best jazz musicians of the current panorama.